Probably their most famous mission was the Low Level raid to Ploesti on 1 August 1943, exactly one year after the first mission was flown. On this raid, of 47 B-24s launched, only 21 returned safely. One crashed on takeoff with the loss of all crewmembers except two. Six aborted before reaching the target. Seventeen went down in enemy territory. Two went down at sea. The Group Commander, Col. John R. (Killer) Kane was awarded the Medal of Honor for his leadership.

On another raid on Ploesti on 9 July 1944, Lt. Donald Pucket sacrificed his life trying to save three of his crewmembers who could not or would not bail out of their doomed B-24. Donald Pucket was awarded the Medal of Honor posthumously for his sacrifice.

The 98th continued fighting the Nazi for the rest of the war. Flying a total of 417 missions and earning a total of 15 battle streamers as well as two Presidential Unit Citations. As cited above, two members of the 98th earned the Medal of Honor.. 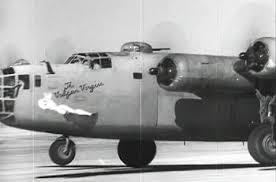 B-24D-5-CO "Dopey"
Unit: 343rd BS, 98th BG, 9th AF, USAAF
Serial: 41-23781
The plane was originally with the 345th BS, 98th BG. It was used as a radar equipped sea search plane. When it was transferred to the 343rd BS the Dopey nose art was applied. It was painted by Crew Chief Amos Nicholson. The starboard side of the aircraft had the nose art Arkansas Traveler. The plane was destroyed by fire on April 11, 1943. There is some question as to what happed. Some say it was destroyed by enemy agents or enemy paratroopers. Some say it was accidentally set ablaze by American soldiers who had washed it with gasoline.

TogetherWeServed.com (TWS) contains comprehensive military records of Military Veterans posted by the Veterans themselves including memories and photographs In addition to its military records search capability, TWS is the largest online community of Veterans existing today and is a powerful Veteran locator. TWS enables Veterans to find those they served with by matching their service information entered on their TWS Military Service Page with the service information of all other Veterans in its membership. TWS members can then review matching members and connect with those they know. Many Veterans try to locate people they served with to re-establish former friendships, but in some cases to also find witnesses to events that occurred during their service for medical claims purposes. TWS has a membership of 2,126,630 Veterans and thousands of Veterans join its ranks every month, therefore increasing the possibility to find old service friends.