Constituted as 305th Bombardment Group (Heavy) on 28 Jan 1942. Activated on 1 Mar 1942. Trained for duty overseas with B-17's. Moved to England, Aug-Oct 1942, and assigned to Eighth AF. Began combat on 17 Nov 1942 and operated chiefly as a strategic bombardment organization until Apr 1945. Until mid-1943, attacked such targets as submarine pens, docks, harbors, shipyards, motor works, and marshalling yards in France, Germany, and the Low Countries. Bombed the navy yards at Wilhelmshaven on 27 Jan 1943 when heavy bombers of Eighth AF made their first penetration into Germany. Received a DUC for a mission on 4 Apr 1943 when an industrial target in Paris was bombed with precision in spite of pressing enemy fighter attacks and heavy flak. During the second half of 1943, began deeper penetration into enemy territory to strike heavy industry. Significant objectives included aluminum, magnesium, and nitrate works in Norway, industries in Berlin, oil plants at Merseburg, aircraft factories at Anklam, shipping at Gdynia, and ball-bearing works at Schweinfurt. Received another DUC for withstanding severe opposition to bomb aircraft factories in central Germany on 11 Jan 1944. Participated in the intensive campaign of heavy bombers against the German aircraft industry during Big Week, 20-25 Feb 1944. 1st Lt William R Lawley Jr, and 1st Lt Edward S Michael, pilots, each received the Medal of Honor for similar performances on 20 Feb and 11 Apr 1944, respectively; in each case a B-17 was severely damaged by fighters after it had bombed a target in Germany, crew members were wounded, and the pilot himself was critically injured; recovering in time to pull his aircraft out of a steep dive, and realizing that the wounded men would be unable to bail out, each pilot flew his plane back to England and made a successful crash landing. In addition to bombardment of strategic targets, the group often flew interdictory missions and supported infantry units. Prior to the Normandy invasion in Jun 1944, it helped to neutralize enemy installations such as V-weapon sites, airfields, and repair shops; and on D-Day, 6 Jun, bombed enemy strongholds near the battle area. Attacked enemy positions in advance of ground forces at St Lo in Jul 1944. Struck antiaircraft batteries to cover the airborne invasion of Holland in Sep. Took part in the Battle of the Bulge, Dec 1944-Jan 1945, by bombing military installations in the battle zone. Supported the airborne assault across the Rhine in Mar 1945. Sometimes flew missions at night to bomb enemy installations or to drop propaganda leaflets. Flew its last combat mission on 25 Apr 1945. Remained in the theater as part of United States Air Forces in Europe after V-E Day; and, from stations in Belgium and Germany, engaged in photographic mapping missions over parts of Europe and North Africa. Inactivated in Germany on 25 Dec 1946. 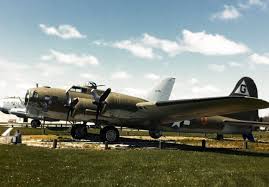 Under Col. LeMay the Group pioneered many formations and bombing procedures that became Standard Operating Procedures in the 8th AAF
The 422nd Bomb Squadron undertook the first night attacks by the 8th AF
Suffered heaviest loss of the 14th October 1943 Schweinfurt mission, and for this reason was given the Nazi flag found flying in the city when it was captured by the US troops

Activated 1 March 1942 at Salt Lake City AB, Utah. They trained there until the 2nd of March 1943. Then moved to Geiger Field, Washington on 11 June 1942 Intensive training at Muroc Lake AB, California from the 29t June to 20th August 1942. The ground unit went by train to at Fort Dix, New Jersey. The ground unit sailed on the Queen Mary on the 5th September 1942, and disembarked from Greenock on the 12th of September 1942. the Aircraft assembled at Syracuse, New York and spent six weeks in advance flight training. They received new B-17F bombers, and left for the United Kingdom in October 1942 via the presque Isle, and Gander to Prestwick.
�

Between 20-27 July 1945 the Group moved to St. Trond, Belgium, where it conducted photo-mapping flights which was called Project: Casey Jones over Europe and North Africa. On the 15th December 1945 moved to Lechfeld, Germany which they had bombed on the 18th March 1944. The 364th Bomb Squadron was inactivated on the 1st of July 1946. The 423 Bomb Squadron of the 306th Bomb Group was attached to the Group after this date but by the end of October 1946 the Group ceased all operations. Officially the unit was inactivated on the 25th of December 1946. On the Continent came under the 9th Air Force and on the 15th of November 1945 under USAFE. The unit was reactivated in 1951 as a Strategic Air Command B-29 unit and as the 305th Bomb Wing and converted to B-47s in 1953. Then became one of the USAF's two B-58 Hustler units.
Load More

TogetherWeServed.com (TWS) contains comprehensive military records of Military Veterans posted by the Veterans themselves including memories and photographs In addition to its military records search capability, TWS is the largest online community of Veterans existing today and is a powerful Veteran locator. TWS enables Veterans to find those they served with by matching their service information entered on their TWS Military Service Page with the service information of all other Veterans in its membership. TWS members can then review matching members and connect with those they know. Many Veterans try to locate people they served with to re-establish former friendships, but in some cases to also find witnesses to events that occurred during their service for medical claims purposes. TWS has a membership of 2,126,764 Veterans and thousands of Veterans join its ranks every month, therefore increasing the possibility to find old service friends.